It wasn't all that long ago that I was so little! 3.5lbs to be exact! Mom snapped the picture on the right of me yesterday. M&D are still so shocked at how big I ended up becomming considering I was so underweight as a kitten. 18lbs! I'm even bigger than Karl! 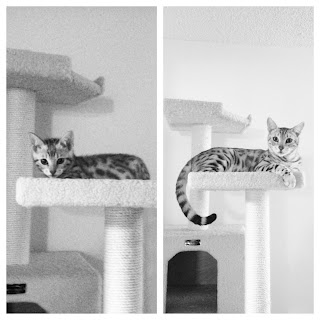 I feel really bad about what happened this week with Karl. But I can't help it!! He smelled different!

He got really fed up with me yesterday morning. I hissed at him, and he jumped on top of me and tackled me to the ground! He sure showed me. I'm no longer hissing at him, but he's still a little hurt by my behavior. So, I'm laying low until he's over this whole thing... SORRY KARL! I love you, I hope we can be brothers again soon.

Well, I had to go for a blood test at the vet today. As usual, I was a good boy and everyone fawned over me and told me how handsome and good I am! I came home to tell Oscar all about it, and he's forgotten who I am again because I don't smell the same!

Oscar isn't blind, so I don't know why he keeps acting like this. He relies way too much on his nose, which is always crusty with boogies anyway, and M&D always have to clean it out. I don't even know how he smells half the time!!!

M&D decided since he isn't trying to fight with me (like last time) and is just hissing at me, and scared, they aren't seperating us. As it stands, we are in the same room and Oscar is ignoring me. If I get too close, he hisses. He is so dramatic <eyeroll>.

I'm totally over this. But karma is going to get him, because M&D said from now on Oscar is coming along with me to the vet even if he doesn't have an appointment. hahahahahahahaha!!!!!

Here is a video of his antics from last time. Luckily, he isn't behaving this way tonight.

Moms says when Karl sleeps, he looks like a perfect angel. It's when he wakes up that all hell breaks loose!

Doesn't he look so angelic sleeping in our bed? You would never think it was the same cat who behaved so bad the other night. 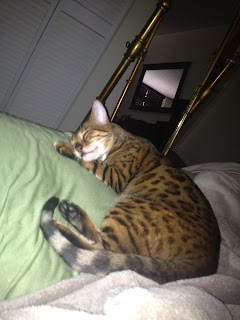 Mom has been working long, crazy hours the past few days. And our way of helping her relax when she gets home (way past midnight!) is by whizzing around the apartment screaming while she tries to rest and dad tries to sleep. We are pulling out all the stops, and even digging out our noisest toys.
It is 4:30am, and she is SO angry with us right now! We keep trying to break into the bedroom where dad is because we want both of them awake to play with us!

Check out Karl breaking and entering: 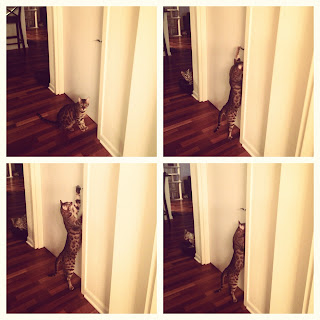 Does this not look like the perfect toy to play with in the middle of the night? It's especially perfect when you live in an apartment building and the neighbors that live below you are trying to sleep! Another thing that is great about this toy (aside from how loud it is), it's not heavy so we can easily drag it out from under the couch where mom tries to hide it. 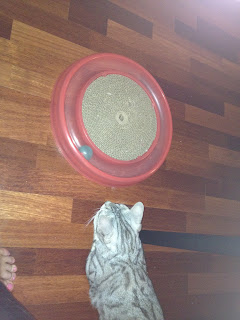 And since blogging relaxes us so much, we've calmed down now that we've startled mom multiple times in the past hour. She can no longer relax because she is so wound up from us. I think Karl jumping on top of the lamp pushed her over the edge. But, lucky for her we found a nice cozy spot to curl up in if she changes her mind:

Today is my 2nd/14th Birthday!

My day has been wonderful so far! Mom & Dad showered me with kisses and pets at 12am. Then, I woke everyone up really early so we could start celebrating me. I was really bad and crazy. Dad played laser light with me, amongst other things then I decided it was time for a nap.

While I was sleeping, dad setup my birthday present. Birds! M&D wanted to get me something really special, so they bought a few different types of birdseed, and put it on a plate on our balcony so they would come eat it and I could watch them from inside! Wasn't that so nice of them?! No birds actually ended up coming... But, it's the thought that counts.

For dinner, I had a can of tuna! and for dessert I was allowed a few crackers (I love crunchy crackers & chips) and for my "birthday cake" a dollop of Cool Whip!

Here are some pictures from my special day. Thanks again Mom & Dad!

It's over 100 degrees outside where we live right now! And since we aren't allowed outside, we love to lay on the windowsill, behind the blinds with our sunrays. It's actually become our most favorite thing to do. We people watch, dog watch, sleep, and generally stay warm. Mom makes the stupid joke that we are "baking" or "cooking" over here because it's so warm by the window. Then Dad has to chime in and talk about which one of us he is going to eat first after we've cooked from laying in the hot window all day!!! They are so crazy!
We yell at M&D if they bother us while we're enjoying our rays. Because it's our special spot, and we don't want them making us leave it ever. Plus. We just know if they laid behind the blinds they would love it too, and there isn't enough room for the 4 of us on the windowsill. Mom has been (as usual) snapping tons of photos of us. Here are a few of our favorites that we wanted to share. We do look a little grumpy in all of these pictures, which is unlike us. It's just because we get annoyed at mom constantly interrupting our relaxation to take pictures of us when we are with our precious sunrays.

We wanted to wish all of our family and friends a Happy Fourth of July!!!!

While everyone is enjoying the beach & BBQ's; we'll be inside sleeping happily and trying to avoid the hideous bang of the NYC firework display and the loud honking cars leaving town afterwards.

Have a safe and happy 4th! 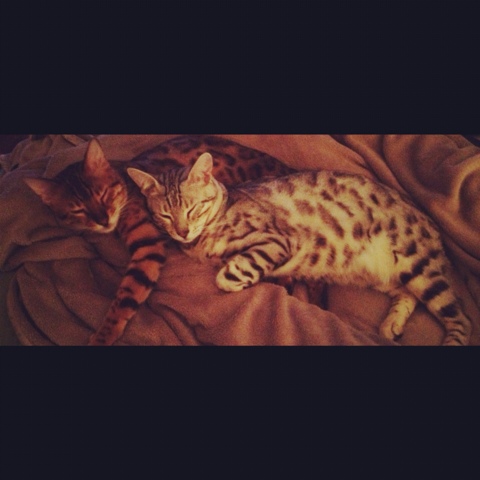 Karl and Oscar
We are just two happy, playful bengal cats who love each other! We have tons of adventures, and love to act silly and we want to share that with new friends.